The point
If we want to create an image with a point of attraction for the look, nothing better than creating an exact point where we want our eyes go.
The point is a chair relaxing for the eyes. A deep tunnel to himself.
A single point has the power of the sun and the full moon. We are concentrated on his form and we submit to him.
A point inside another point will also be a single point, because there is a fusion. 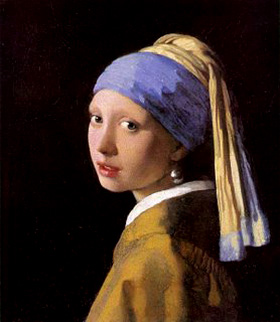 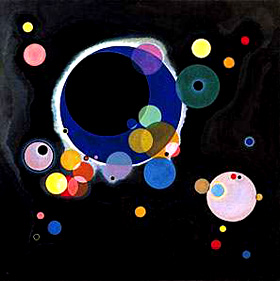 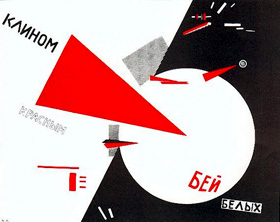 Three great works that have a point as protagonist: Girl with a Pearl, by Vermeer, Several circles by Kandinsk and Beat the whites with the red wedge, by El Lissitzky

Learn about the Point and you will learn about your look.

Two points
The existence of two strong key points in the image generates a relationship. Points can be varied and, according to their shape, color, tone, size, or other graphical elements, they will create a different relationship between the two points. They are like couples, love and hate, attraction and repulsion. Two energies that will generate a lot of movement in our view. And the final feeling depends on the other graphic elements that make up these points.

Three points, four points, five points …
Increasing the points we increase the characters of the image that we are experiencing.
The same laws apply here. Depend on the size, color, tone, applied graphics, space, etc., and it depends on the character of each point and their relationships to each other.

The dither of points or Pointillism.
The use of many points makes that the power of the point by itself disappears and generates a texture or dithering. Independent points try to separate and define other graphics elements as tone. Since a point has a tone, and another point has a different tone, we built an image but with these minimal points taht are a kind of small concentrated power. This is a scientific method-analyst. But above all, it generates a kind of image that belongs to the power of the textures.

Point derived forms
The break point. Can begin to vanish by one edge, or can be impacted by other graphic element on it. The point, that focuses its own energy, suffers an escape theat weaken it, and thus, the escape will attract the viewer’s look.
The spheres are also derived forms of the points and they have a strong relationship with lights and forms.

Where are the points?
Where is the point, will greatly affect the image. For realistic paintings should be noticed that the points are concentrated in masses of color. But also in the measures or distances, since that mark beginnings and endings, spaces. A void point is a point and also an invisible energy concentrated in negative state.

The set of points in the image is very important to compose because they are very dominant and expressive elements.

How to paint shadows

The name of the colors and their connotations