One of the most important ideas that Kandinsky sought to represent in his great work was the music and the sounds. This is how he expresses it in his written works where he adds “the spiritual”. This “spiritual” is closely related to the “abstract thinking” that humans carry out to understand more things. 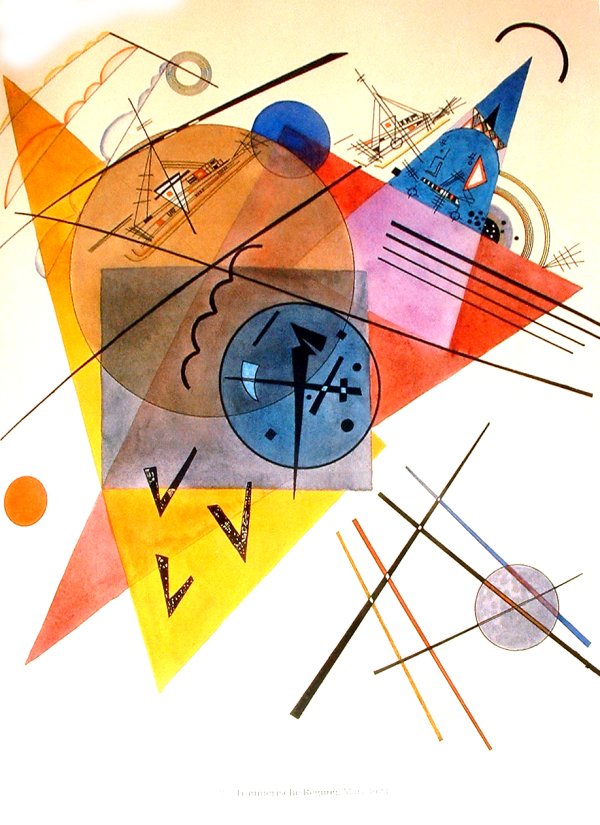 Sound is the means by which certain abstract concepts that humans understand are expressed. Language is a sound expression, either in thought or in communication. Language manages not only the information received by perception but also abstract concepts, those that have no physical or material representation. Moreover, the human being, thanks to language, invented symbols and is capable of developing more abstract ideas, thinking about things. that do not exist and to project a future.

In short, the sound is essentially Abstract.

We give meaning to a sound. Then it acquires the courage to represent something. This is the case with words that define things.

But sound, in addition to defining things, allows us to develop abstract ideas, non-tangible concepts, which communicate directly with feelings and what we could call “spirit”.

Kandinsky discovered that by freeing color, line, plane, that is, the basic elements of the image, from the physical representation of the world, he managed to free the message from concrete ideas to more abstract ideas.

If in the image there are shapes that represent specific ideas, then the message is being specified towards specific ideas. If there is no representation, the thought of the viewer who sees the abstract image can access other types of ideas, and these are also abstract ideas.

If the painting represents an object, the thought focuses on that object of reality. Directly associations are made and the message is configured in the viewer.

If the painting does not represent an object or anything concrete, the associations of knowledge are disconnected and the sensation comes into operation.

Although at first Kandinsky began developing a figuration art, later he gave the image total independence. For this, he studied the sensations and the effects that colors, lines, and all the elements of the image produce in human psychology.

Kandinsky also studied “the abstract interior sound” of the forms and elements of the image (whether they are representations or purely abstract). Understanding as “inner sound” the sensations that emanate. He said “Every object, without exception, whether created by nature or by the hand of man, is an entity with a life of its own that inevitably emits some meaning.”

Understanding abstract art is knowing how to communicate with the inner sensations that the image provokes, feeling the image and being aware of the feeling itself.

Creativity and meditation with Meera

José Manuel Merello and how the color moves towards the form

Surrealism: The painters of dreams